The last full day of the con.  We ran two In Her Majesty's Name Games.  The fluff


The County of Krabbenstein is distinguished mainly by its small size and gloom.  You could say that it is nestled into a remote region of the Balkans, but nestled makes it sound nice and quaint.  Strange and drear works better.  Krabbenstein has remained independent under its Count for centuries mainly because it was not worth the effort.  The Ottomans bypassed it and steered even further away over the years when foraging parties had a nasty habit of disappearing.  The Austro-Hungarians were not any more interested.


If you had to pick a single adjective for Krabbenstein it would be gloom.  A curious combination of mountains, prevailing winds and nearby lakes leave Krabbenstein shrouded in clouds and fog 9 days out of 10.  Curiously the clouds always part at sunset of nights with a full moon, then fog sets in and by dawn the gloom is back.


The valley is dominated by Castle Krabbenstein.  The Count, his family and Cossacks are rarely seen unless it is to make strange and onerous demands on the population.  The count has some unknown hatred of the Gypsies.  Recent rumors suggest the Count has found a relic that will give him greater power once he figures out how to use it.  The cliffs of hill the castle glowers from are dangerous terrain and takes a full turn to climb.  The dry moat is type 2 cover and difficult terrain to move through.


The combination of mists and woods provides type 2 cover and makes it difficult to move through the woods.  Visibility in the woods is limited to 8".  The villagers do not enter the woods willingly unless they are cutting wood or hunting wolves.


Schwartzdorf's citizens lie restless under the abusive hand of the Count.  Father Dubnik has convinced them that too many babies have been stolen, too many maidens exsanguinated, and too little to show for it from the Count.  "A riot is a terrible thing, and it is about time we had one!"  Inside the church nave is a long forgotten map from the Crusades purporting to show the location of a tomb.   All of the buildings are sturdily built and provide level 3 cover.  Opening or closing any door costs 2" from movement


Gypsies sit camped outside the village.  Villagers always make the sign of the evil eye, especially when they see the blank stare of Old Magda.  Young men have disappeared after pushing their amorous advances on Esmerelda and Mala.


Father Dubnik secretly requested assistance from the Duchy of Zef.


Other foreign groups with dubious motives have been sighted in the area
Between the two games 14 players had the chance to try "In Her Majesty's Name"  The games turned out very differently.  What was common to both was that the villagers took a pasting.    The picture below was from the first game looking down from Castle Krabbenstein.  The werewolves waited to spring their surprise until after the Count and Villagers had mostly eliminated each other.  In the second game the Werewolves went all in from the beginning and were the target of the villagers and the Count.
The highlight of the second game was when the Egyptian professor stole the Gypsy/Werewolf wagon.  The players discussed what sort of squeaky toys and blankets were stored in the wagon.
Two good games with fun players - a great way to end the convention 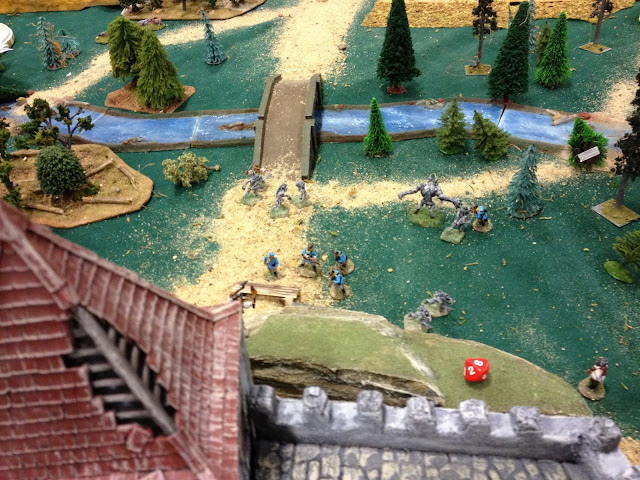